On April 1, 1938, Senate Bill 161 was signed into law by Governor Hugh L. White creating the Mississippi Highway Safety Patrol.  Since then, the Mississippi Highway Safety Patrol (MHSP) has promoted the safe operation of motor vehicles on the state’s roads and highways by enforcing the rules of the road as set forth in Title 63 of the Mississippi Code of 1972.  Upon request, MHSP will assist counties and municipalities with limited resources and expertise in resolving crimes and other law enforcement-related issues in their jurisdictions.  State Troopers must also be prepared to respond to statewide emergencies at the request of the Governor.

Each division of the Mississippi Highway Safety Patrol works diligently to protect life and property by maintaining law and order with courtesy, service and safety.

For complaints, please scan the QR code below. 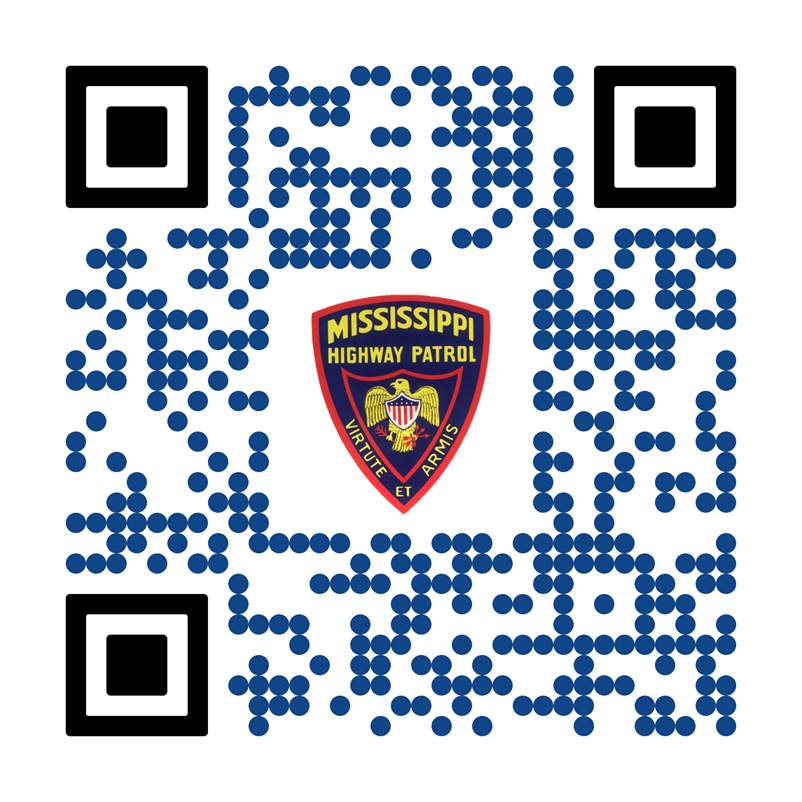 The mission of the Mississippi Highway Safety Patrol (MHSP) is to enact its motto of courtesy, service and safety in maintaining law and order within the State of Mississippi.  MHSP promotes safe operation of motor vehicles by enforcing legally established rules of the road; assists local law enforcement agencies with criminal and other investigations; and provides and maintains state-issued licenses and documents.  MHSP seeks to maintain a positive relationship with the residents of Mississippi via highly ethical conduct, professional public service, meaningful public awareness campaigns, effective communication, and responsive leadership and assistance in cases of emergency and disaster.

The Assistant Commissioner of Public Safety also known as the Chief of Patrol with the rank of Colonel, manages the operations of the Mississippi Highway Safety Patrol.  As Chief of Patrol, the Colonel oversees the daily operation of the largest statewide law enforcement agency in Mississippi.  There are four Lt. Colonel positions within MHP that report directly to the Colonel along with the Captain of Internal Affairs and the Captain of Governmental Affairs.  The Colonel reports directly to the Commissioner of Public Safety.

The Mississippi Bureau of Investigation is primarily responsible for the investigation of criminal activities in the state and is managed by a Lt. Colonel, who serves as Director of MBI and reports directly to the Colonel.

The Mississippi Law Enforcement Officers’ Training Academy (MLEOTA) is primarily responsible for providing training facilities for employees of the Department of Public Safety and other law enforcement officers in the state.  MLEOTA is managed by a Lt. Colonel who reports directly to the Colonel.

The Driver Service Bureau is primarily responsible for the licensing of the state’s citizens for driver licenses, gun permits and official state identification cards.  The bureau is also responsible for maintaining secure and accurate repositories and is managed by a Lt. Colonel who reports directly to the Colonel.